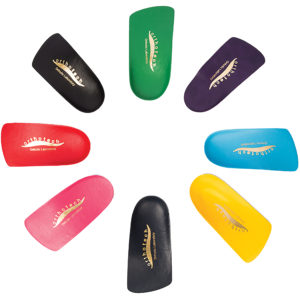 If you’ve got a pair of orthotics, then you should know that you need to have them checked each year. But did you know that doing so actually saves you money, time and the potential for a great deal of pain? Yep! Here’s how and why, perfectly illustrated by our patient, Peter.

Meet Peter
We first met, treated and prescribed orthotics for Peter over four years ago. He was suffering from pain in his right ankle, caused by multiple sporting injuries from his younger years.

Now, in his 40’s, Peter could no longer walk comfortably and his pain levels at work were at an all-time high.

Peter’s Orthotics
We prescribed Peter a pair of custom-made orthotics as part of his treatment plan. After eight weeks, his pain was completely relieved. We advised Peter to continue to wear his orthotics when he was planning to go for long walks or spend a lot of time on his feet, to keep his feet and ankles controlled and supported and reduce the risk of re-injury.

Peter Returns
Peter recently came back to see us after four years! We noticed that his orthotics had significantly worn down, and were no longer providing sufficient support. Peter was also experiencing:

The orthotics had stopped supporting Peter’s weak right ankle and the repeated rolling in on his flat feet was straining a number of muscles and ligaments. Ultimately, it resulted in Peter’s ankle pain returning.

Peter’s Results
After taking new 3D laser foot scans to create a new pair of custom orthotics for Peter, we needed to prescribe a new treatment plan to strengthen his ankle, stretch the tight muscles and improve his footwear. We used strapping tape to help provide temporary pain relief until the orthotics were ready.

Four weeks after Peter’s new orthotics were fitted, his foot pain has completely disappeared – again! Peter will be back before the end of the year for his orthotic review to ensure that this doesn’t happen again.

Why Your Orthotics Need An Annual Review
During your review, we check the wear and compression on your orthotics that has naturally occurred over the past year. All our orthotics have a very specific job and function – and are custom-made to complete that job effectively. Wearing your orthotics keep your feet controlled, supported, and stabilised. This reduces your risk of overloading your muscles and ligaments to the point of strain and injury – especially when this has happened before.

If your orthotic check shows that some significant compression or changes have occurred, it doesn’t mean that you will need a new pair. We can replace any pads, additions and covers on your orthotic to restore the right level of support. Sometimes, if heavy wear has caused the shell of the orthotic to flatten or compress, we may need to create a new pair.

Often, patients will create a second pair of orthotics so they don’t have to switch their orthotics between their work shoes and joggers – or any other shoes that they wear often. This also increases the lifespan of both pairs of orthotics.

Risking Time, Money And Pain
When you skip your orthotic check, you risk your initial pain and injury coming back. Treating your injury at this point won’t just mean creating that new pair of orthotics to restore the control at your foot and ankle, but also spending time and money rehabilitating the re-injured structure while you put up with more pain and frustration.

Keeping you active and feeling great on your feet is exactly what we do here at the Melbourne Foot, Ankle & Walking Clinic. If you know that it has been too long since your last orthotic check, or you’re starting to feel some discomfort or pain returning to your feet or legs, we’d love to see you and help – even if your orthotics weren’t originally made with us!

We have a dynamic team of experienced and trusted Podiatrists that specialise in optimising the way you walk and run. You can book in by calling us on 1300 135 374, or fill in our appointment form at the side of this page and we’ll get back to you shortly.